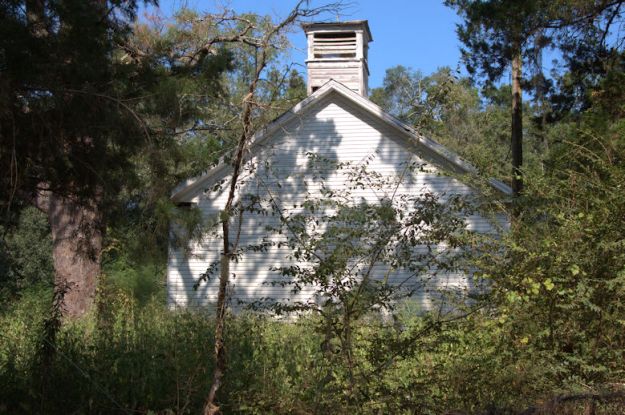 I was unable to get a better shot of this church as it’s surrounded by a fence and very aggressive dogs. It’s now privately owned, and since there has been vandalism in the area before, I understand the desire to protect it. Though on a different road, it’s virtually next door to Liberty Baptist Church. The historic marker placed  by the Georgia Historical Commission in 1966 reads: This church had its beginning in 1832, on the plantation of William H. Ramsey, about 4 1/2 miles Southwest of here. There being no Methodist services in the vicinity at the time he and his family moved to this area, Mr. Ramsey built a brush arbor near his home and there held Bible study and worship services. Later he joined with other Methodist families and built a log church 31/2 miles South on the road to St. Marks. They named this church, Lebanon, and some time during the 1840s it was made a regular monthly appointment. In 1856, it was decided to move the church to Grooverville, a more central location, and Malachi Groover made a deed of gift to one acre of land – the present site – to Richard Ramsey, M. W. Linton and W. R. Joiner as Trustees. Mr. Linton sawed the lumber and the carpenters from his plantation built the church edifice. The name of the church was then changed from Lebanon to Grooverville, and it became the largest on a circuit originally composted of Grooverville, Prospect, Hickory Head and Beulah. Three grandsons of Wm. H. Ramsey, the founder of this church, became Methodist ministers in Georgia conferences.

As of 2016, the dogs were removed from the property in an alleged animal hoarding/welfare case. I sincerely hope that this means good things are in store for the future of this historic structure.