The lost community that came to be known as Church Hill was opened to white settlers by the Land Lottery of 1827. To accommodate new arrivals, Native American trading routes were improved or superseded by the creation of new roads. In 1832, Timothy Barnard’s Path, which ran from Columbus to St. Marys, became known as the St. Marys Road or the Old Salt Trail. At a point between Kinchafoonee Creek and Lanahassee Creek, where three roads crossed St. Marys Road, five churches were built in a relatively short time, including: Mt. Pisgah (Kinchafoonee) Free Will Baptist (date unknown); Shiloh Baptist (1835); Christian Union (1840); Smyrna Associate Reformed Presbyterian (1838); and Evan Chapel Methodist (1838). Records indicate a school known as Centerville Academy was formed by the Smyrna trustees in 1838, suggesting the original name for the community was Centerville. It is unclear when the moniker of Church Hill came into use, but it first appeared on maps in 1870. The Church Hill post office was operational from 1893-1903, so it is likely that the area suffered a significant population decline at the beginning of the 20th century.

Shiloh-Marion is the last remaining church of the five that gave Church Hill its name and is a great example of vernacular Greek Revival architecture, common in antebellum churches in Georgia. A sign at the church notes the founding date as 1812, the year of the first mission; further documentation gives the founding date as 1835, when eleven members joined the Bethel Baptist Association. The church structure is believed to be contemporary to the latter date.

The cemetery is a fascinating landmark in its own right, containing typical Victorian monuments and an unusual collection of stone markers. The stones are either stacked in elongated triangular forms or used as fencing. There has been some speculation that they are Native American in origin and to my knowledge there are no familial claims by church members. This still doesn’t get anywhere near evidence of Native American ties, but t’s worthy of investigation either way.

A sign and wooden cross mark the slave cemetery.

Unmarked concrete stones have been placed at approximate burial locations. 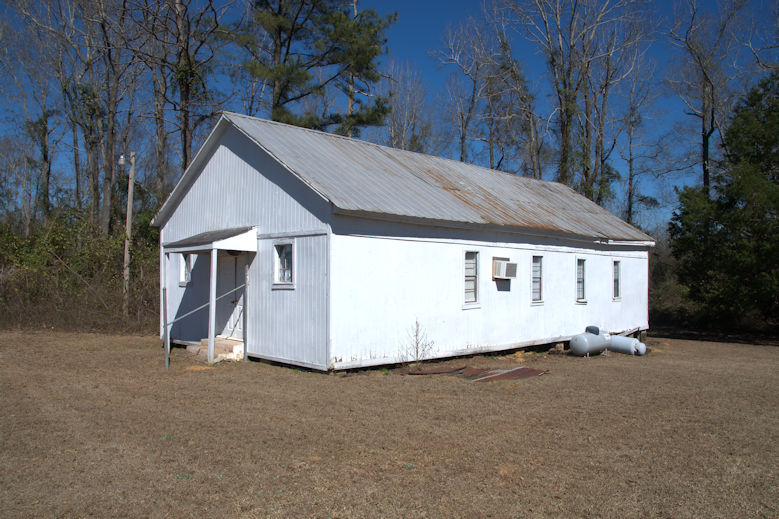 This is located near the historic community of Church Hill.