Nine years ago, Lindsay Thomas, Jr., whose family owns and maintains this wonderful Georgia Centennial Farm, reached out to me about photographing the old home place near Screven. Lindsay’s father served in the United States House of Representatives from 1983-1993. Lindsay was very interested in documenting the large number of catface pines and Herty cups on the property. I still haven’t gotten around to making those photographs, but hope to someday soon. [For those not in the know, catfaces are the scars left behind by the collection of pine sap for the manufacture of turpentine. The naval stores business was dominant in this region until at least the 1950s.]

The farm, known as Grace Acres today, was established by Captain C. C. Grace, circa 1864, and the house was likely built around that time. The family has maintained a presence in the area ever since and they’re not only good stewards of the land, but they do a fine job of maintaining this historic home. 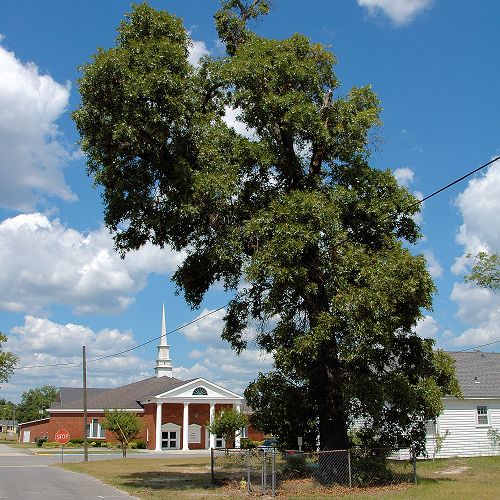 Across the street from  Screven United Methodist Church is this great Turkey Oak (Quercus laevis), once the National Champion of its species. The American Forestry Association’s National Registry of Big Trees named it to the listing in 1991, stating its dimensions as: 106″ circumference, 80′ high, with a crown dimension of 55′. Sandee Strickland notes that a tornado in 2005 did damage to some of the crown; another Turkey Oak, in Florida, is the current champion. Turkey Oaks (Quercus laevis) are a staple of sandill and scrublands in the Deep South and most field guides suggest that they are rarely taller than 30′-50′, so this tree may still be the tallest extant of the species. 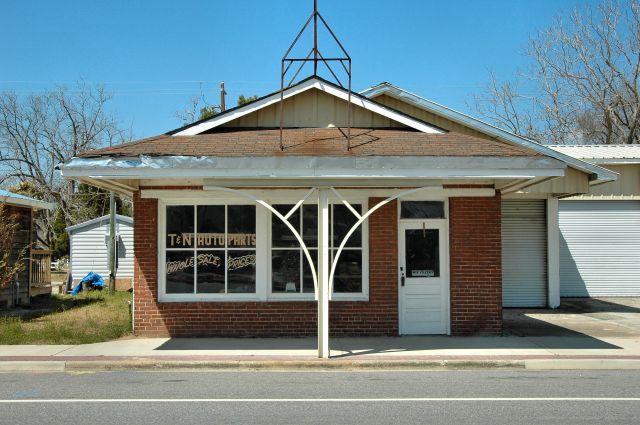 I’m sure this was a mid-20th-century service station, but I’m not familiar enough with this type of architecture to determine which brand of gasoline it sold.