Architect Chris DiMattei notes that this home was the design of one of the most prominent architects of Victorian America, George F. Barber. It’s an example of Design #1 from Barber’s Cottage Souvenir pattern book. Thanks to Leigh Ann Green for the identification and to Mary McIntyre Smith, who wrote: This is the Carrell-Harman Home Place was built in 1896 by a doctor for his wife, but she did not like it. My husband’s great-grand parents, John Rasco Carrell Sr. and Sarah Elizabeth Clewis Carrell bought the house in 1899 and lived there until they died in 1909 and 1910. Their children included David Edward Carrell, born 1878 died 1879, Charlie Zollie Coffer Carrell born in 1879,died 1906, Mary Zeph Carrell born 1881 and died in 1977, Symthy Pauline Carrell born in 1883 and died in 1919, Lessie Corinne Carrell born 1886 and died in 1955, John Rasco Carrell Jr. born in 1889 and died in 1958, Verner Carrell born in 1892 and died in 1945, and E. B. Carrell born in 1896 and died in 1919. Aunt Zeph Carrell married a Mr. Harman and bought the house in approx. 1911 and had two children, Katherine and James. Years later, after retiring, Katherine returned to Unadilla to take care of Aunt Zeph. Both Katherine and James have since passed away, but James had one son, Robert Carrell Harman II (Bobby), who lives in the house today. So, the house is referred to as the Carrell-Harman Home Place. In recent years, the Carrell-Harman House had a 100 year birthday party organized by the Carrell family and it was well attended. Cousin Katherine gave this information to my sister, Mary Carrell Smith Morrison, several years after the birthday party.

UPDATE: This house was lost to fire on 26 December 2017. Ginger Lemmon writes: Sad to report that this home burned tonight. Unadilla has lost a historical treasure.

I believe Unadilla is in the process of attempting to rehabilitate some of these properties. 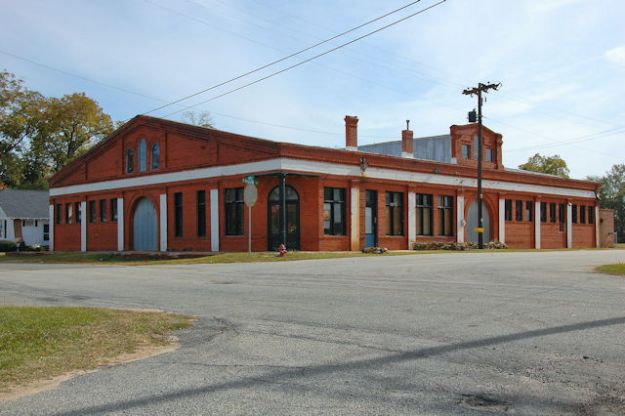 One of Georgia’s most attractive cotton warehouses, Unadilla’s Planter’s Warehouse was earlier owned and operated by W. B. Hodges and Frank Giles as Giles and Hodge Farm Center. It, along with all of Unadilla’s historic commercial district, should be placed on the National Register of Historic Places. I hope such an effort is underway.