“The depot was constructed with granite block, likely including a few granite cross ties that were used along the rail line before the advent of heavy steam engines required their replacement with more flexible wooden cross ties.  Depots constructed entirely from stone are extremely rare in Georgia.  Most depots are constructed from wood or brick with only a few built with the exterior walls entirely constructed from granite block.  The depot, built to serve the Athens branch of the Georgia Railroad, also served the towns of Arnoldsville, Dunlop, Maxeys, Union Point, and Woodville.  The depot also served as a shipment and supply facility for the Confederate Army during the Civil War…”

William Harris Crawford (24 February 1772-15 September 1834) was the best known Georgia politician in the early 19th century, though he’s all but forgotten today. Born to a poor farmer in Virginia, he moved to Georgia at the age of 14, and soon began to study law. He was admitted to the bar in 1799. Through his appointment to write a digest of Georgia laws, he came to politics. He was elected to the Georgia House of Representatives in 1803 and allied himself with U. S. Senator James Jackson, the leading opponent of the rampant land speculation that had earlier culminated in the infamous Yazoo Fraud.

Jackson had been a governor of Georgia and a hero of the American Revolution. He was also a bitter rival of Elijah Clarke. Crawford killed Peter Van Alen, one of Clarke’s allies, in a duel in 1802. Then Clarke’s son John (Clark) injured Crawford in another duel. Seeking to end the rivalry, John Clark challenged him to yet another meeting thereafter, but Crawford refused. This infuriated Clark, who whipped a Crawford ally, Judge Charles Tait, in Milledgeville.

Crawford served in the United States Senate from 1807 to 1813. In 1813, he was offered a position as Secretary of War by President James Madison, but turned it down and served two years as Ambassador to France. It was offered to him again in 1815, and he accepted. He served from 1815 to 1816 when he was appointed Secretary of the Treasury by Madison. He served under President Madison and under President James Monroe from 1816 to 1825. He made an unsuccessful bid for President in 1824. In 1825, he was again offered the position of Secretary of Treasury by President John Quincy Adams, but refused due to ailing health. Upon his return to Oglethorpe County he was appointed a judge in Georgia’s Northern Superior Court Circuit. He died on the circuit at Elberton in 1834 and was buried in the Crawford family cemetery near present-day Crawford. 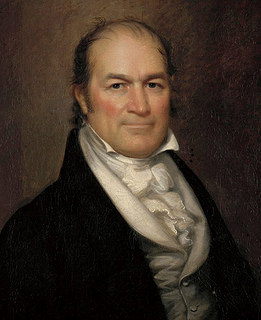