Metcalfe (sometimes spelled Metcalf) is a tiny hamlet between Thomasville and the Florida line, linked for much of its history by the railroad that passed through here and the timber industry so active in the area. For many years, these old storefronts were in a state of disrepair and their future was uncertain. The drive down from Thomasville on Magnolia Road & Metcalfe Road, passing through grand old longleaf pine plantations, is one of the most beautiful in the state.

In December 2008, a large group of concerned citizens attended a rehabilitation meeting initiated by Thomasville Landmarks and the Georgia Trust for Historic Preservation with the purpose of discussing the future of Metcalfe.

One of the first efforts was the restoration of this structure, built in 1916 as the Metcalfe Branch of the Commercial Bank of Thomasville and later known as the Bank of Metcalfe.

These old country stores have been restored, as well. 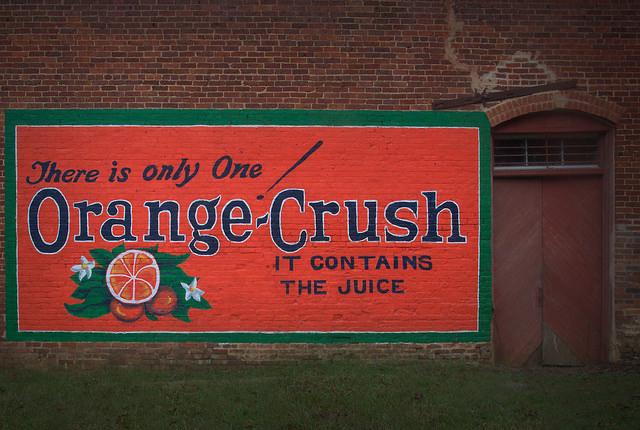 This mural adorns the side of the old cotton warehouse.

Now home to a lumber company office, the old Metcalfe Depot is a wonderful survivor. It’s design was the standard of the short-lived Savannah, Florida & Western Railway (SF&W), known as a combination station for its use as a passenger and freight facility. Henry Plant built a line from Thomasville to Monticello, Florida, as part of the SF&W in 1888 and this depot likely dates to that year. Metcalfe was officially “founded” in 1889, likely a result of the coming of the rail line. After Plant’s death in 1899, disputes among his heirs lead to the break-up of the SF&W and the Atlantic Coast Line took over this route in 1902.