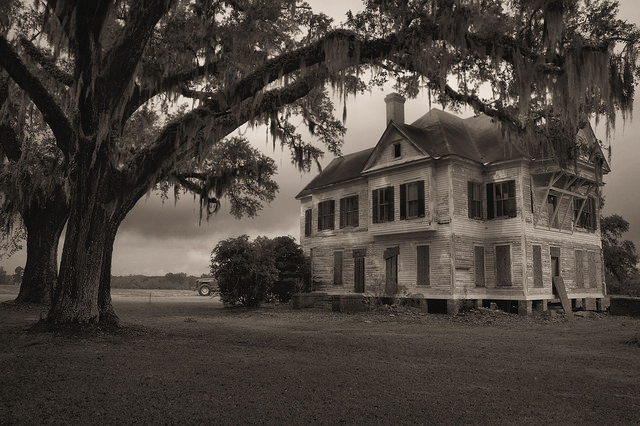 This house is to me one of the great rural landmarks of South Georgia, due not only to its imposing stature but its pastoral setting behind mossy oaks. I never knew anything about it until recent correspondence (October 2017) with Alysssa McManus, a Florida architectural historian who has been as fascinated by it as I have. Some mysteries about people connected to the house have arisen.

I’m removing earlier points made about the house until I can clarify its history. It is also referred to as the Wasden-Snow House.

Thanks to Marian Phillips and Michael Williams for sharing photographs and inspiring me to find this place.

Brian Brown is a documentary photographer, author, and historian who lives in Coastal Georgia. View all posts by Brian Brown

© Copyright Brian Brown Photography/Vanishing Media USA 2008-2022. All Rights Reserved. Unauthorized use of this material without express and written permission from this website’s author/owner is strictly prohibited. Excerpts and links may by used, provided that full and clear credit is given with appropriate and specific direction to the original content. For my purposes this now applies to Pinterest, Facebook group pages which collect photos without attribution, Tumblr, and all other photo harvesting platforms. Unauthorized use of any material on this site is a violation of copyright. Please report broken links and violations of copyright.