This imposing Greek Revival plantation home, situated on a high point overlooking acres of gently rolling hills and pristine farmland, was built by William Jackson for his son, John Swinney Jackson and his first wife, Artemesia Hall. The elder Jackson acquired the property from William Knowles in 1832. John Jackson, who had lived all of his life in Hancock and Greene Counties developed the property, through slave labor, into a thriving agricultural operation. At the outset of the Civil War, Jackson owned over 1000 acres and 38 enslaved Africans. Like most Georgians, Jackson served the Confederate cause and the futile effort ended in his loss of the plantation. It was purchased by Robert M. Grimes in 1870 who sold it to James M. Harris in 1874. Grimes reacquired it in 1880, but after a lawsuit over debts sold it back to Harris in 1881. Harris sold it to Henry Thomas Lewis in 1900. Lewis was an Associate Justice of the Georgia Supreme Court who lived in Greensboro and Siloam, keeping the plantation as a country retreat. After Lewis’s death, his widow sold the plantation to Jeff W. N. Lanier, whose family owned neighboring lands. Subsequent owners were D. B. Taylor and Dorsey L. Campbell. Campbell’s daughter, Alice Hartley, deeded the house back to the Lanier family in 1982. 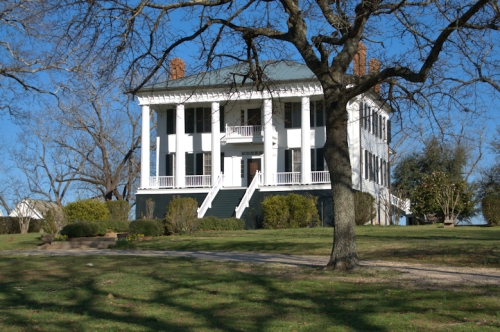 The property is known today as Shoulderbone Plantation, for the historical Shoulderbone Creek which runs nearby.