Two people reached out to me to say that the old DeBerry Baptist Church was being torn down. The original chapel is around 100 years old.

There is a larger more modern facility on the property and I presumed the demolition would allow for further expansion. However, Rafe Semmes writes that the reason the church is being torn down is that foundation has suffered extensive rot and the cost of repair was deemed too expensive to be practical.

The South Georgia Conference of the United Methodist Church notes: The story is told that a circuit rider came to hold services at the site of this church and no one came, so he called it “Lone Hill”. The first building was erected on this site, in Coffee County, between 1848 and 1854…The adjacent cemetery contains the graves of the early settlers to the community. The earliest marked grave is of the infant son of Dan and Winafred Newbern born and died January 4, 1848.

The cemetery is also home to the National Champion Eastern Red Cedar. 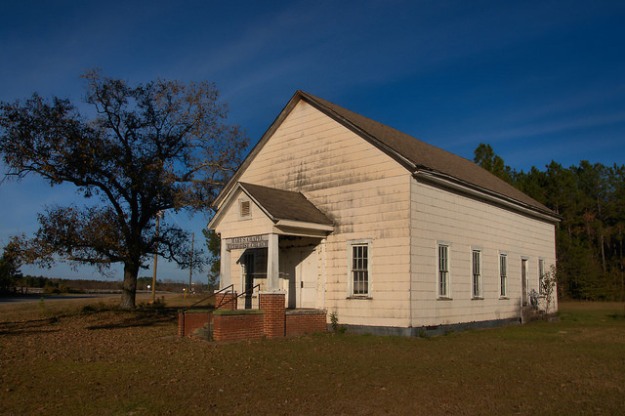 This church was organized at Mobley’s Schoolhouse in 1911, but the congregation was too large for that facility. This structure was built soon thereafter. The church is named for Mrs. Mary Newbern Smith, who I assume may have given the land for the construction of the church, but I can’t confirm that at this time. 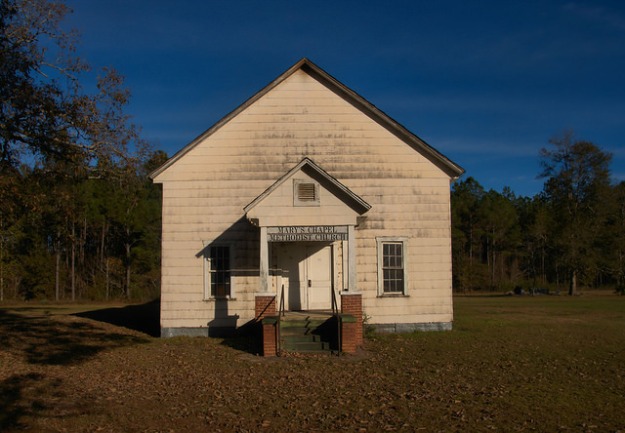 I originally thought it was abandoned, but it’s still active. Reverend Beverly E. King is pastor. They have services there on the second and fourth Sundays at 10:00 A.M. and also have 100% attendance most of the time.

Historically, this church served as Saint Paul’s Catholic Church, though it recently became the home of Saint Andrew’s Anglican. Since the church is primarily known for its Catholic associations, it is that history (from the Diocese of Savannah History book) which I’ll share here: …In the 19th century, Catholics were scarce in South Georgia. In 1898, Bishop Thomas A. Becker entrusted what was then the Albany Mission to the care of priests of the Jesuit Order. Later, he divided this territory, allocating the southeastern section to Marists who had recently arrived in Brunswick. Specifically, Marist priests were to serve Johnston Station, Willacoochee and Alapaha. Johnston Station had no church at this time. Willacoochee had a frame building for services and Alapaha had a small log cabin surrounded by a little cemetery belonging to the Murray family who were Catholic.

In time, visiting priests discovered a few Catholics in McGovern’s Settlement and learned of a “Mrs. Creel” in Douglas. Local lore disclosed that Catholic families in other parts of Coffee County had never heard of members of their faith’s being in Douglas before 1899 when Mrs. Creel’s baby was baptized. By 1901, the territory was restored to Albany’s care. In the early 1900s, several Syrian families moved to Douglas and Mass was celebrated there twice a month. Things remained about the same for some time.

They changed radically when the new Bishop of Savannah, Gerald P. O’Hara, visited Douglas in July 1936. The 40-year-old bishop received a rousing reception. The city fathers strung electric lights on the lawn of one of the Syrian families – the Hannas. More festivities were ahead that evening when the town leaders and ministers of other faiths turned out, as well as the small Catholic community, to greet the bishop. Impressed by this reception, Bishop O’Hara – never slow to catch on – bought a piece of property for $1,000 on which to build a Catholic church. On March 6, 1936, ground was broken for the church. Two years later, on Sunday, July 17, 1938, the bishop dedicated St. Paul Catholic Church, Douglas. Fathers John Mullins and Daniel J. Bourke, were named pastor and assistant, respectively.

Thanks to Tom Johnson, who is working on digitzing the Rogers Studio Collection,  for the above photo. It was made on 17 July 1938, the day the congregation held dedication services.

John Crowley writes: Arna is the correct spelling, although it was always pronounced “Arnie.” It was organized in 1888 and joined the Union Primitive Baptist Association. At one time in the early 1900s it had in excess of 100 members. The church finally disbanded in about 2005 or thereabouts.

Arna is of a typical design for Primitive Baptist churches, especially of the “hardshell” variety, with doors on all sides and the primary entrance on the side. The large cemetery is the final resting place of many area pioneers.

Many historic graves can be found in the cemetery.

Thanks to Jaci McKinnon for first making me aware of this interesting and little-known aspect of Coffee County’s history. In his History of Coffee County (1930), Warren P. Ward notes that Mormon missionaries came to the area in 1898, led first by Elder Nephi Henderson and an Elder Brewer. Elder Ben E. Rich established the church in Coffee County. He was succeeded by Elder Charles A. Callis. Early families who converted to the Mormon faith were those of Calvin W. Williams, Dan P. Lott, and Joseph J. Adams.   “Many citizens of the county were excited over the appearance of the Elders. Some regarded them as messengers from Heaven, gave them shelter and lodging…Others regarded them as emissaries of the devil, wrecking homes and carrying away women…Coffee County has been a fruitful field for the Mormon Church, it having grown to a membership of over seven hundred. There are two churches in the territory-Cumorrah Church in Coffee County and the Utah Church in Atkinson County, formerly Coffee.” I’m not sure what happened to the congregation but will continue to research it and will photograph the nearby Mormon Cemetery the next time I’m in the area. (Thanks are also due to Andrew P. Wood for pointing me to Ward’s history of the Mormons in Coffee County).

D. O. Adams writes that this is the oldest standing LDS church in the Southeastern U. S. He also kindly shared the following history, which is the most detailed account I’ve ever seen regarding Mormons in South Georgia. 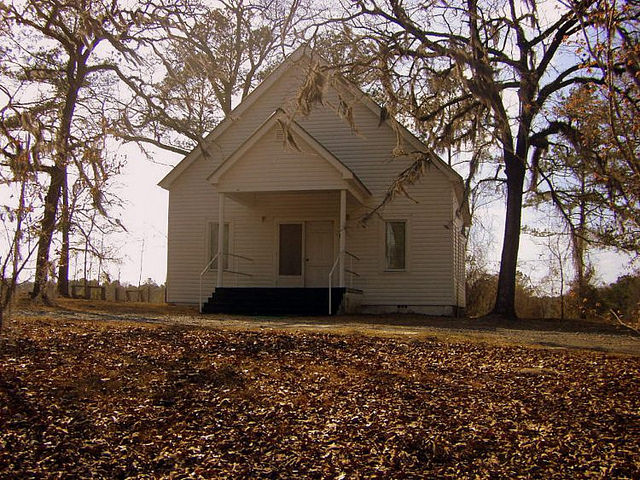 This historic congregation near the Ocmulgee River dates to 1846. It shares a pastor with Mary’s Chapel these days, but still holds services. 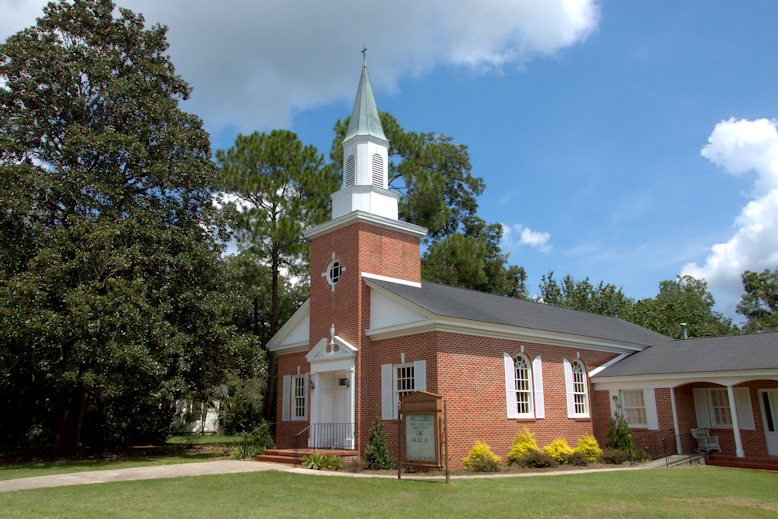