Most of us who have grown up swimming in rivers and creeks are familiar with rope swings tied to trees that have a good reach over the waterway, and occasionally, we see impromptu ladders added to make the climb to the top easier. I shot these several years ago near the Meriwether County Landing on the Flint River and I think they had more steps than any I’ve seen.

I really didn’t know what to call them other than “diving trees”. They’re really more for jumping than diving, especially when the rivers are low. I don’t think there’s any consensus as to an official term but they’re a thing down here in southern Georgia and I thought these two were perfect examples.

When I stopped at Maebob’s Diner in 2017 [the date of this photograph], it was the first time I’d eaten there since my college days, and the food was just as good as it was in the early 1990s. I’m not sure how long the place has been open, but I’m saying it’s at least 30 years. There is nothing pretentious about the place and nothing fancy, but the homestyle Southern food does all the talking. It’s really the only gathering place in tiny Irwinton and much of Wilkinson County passes through here at one time or another. The day I was there, a soap opera was playing on the television, and one of the servers and a couple of the customers were paying attention when they could. It made me think of my grandmothers referring to soap operas as “the stories”. They watched them religiously and you knew not to call them while they were on, which, depending on the shows they watched, was anytime between 12:30 and 4PM.

This whimsical crawfish sculpture was crafted by Camden County educator Carlos G. Jones, Jr., in 2009 for the annual Woodbine Crawfish Festival and is located at the Satilla River Waterfront Park.

A friend recently reached out to let me know that I should photograph this Fitzgerald landmark because it’s about to be razed for redevelopment, as are all the other adjacent commercial structures. (Thanks, Sara Padgett). The little brick building at the corner of Merrimac Drive and the Ten Mile Stretch will always be remembered as Floyd’s Hamburger Shack, but its history goes back a bit further.

Francis Marion “Frank” Malcolm II (1874-1954) came to Fitzgerald from Waycross in 1906, and in 1910 he bought the largest single tract of land (11 acres) in the city, to which he moved a home from Alapaha Street (still standing) and built other structures over time. [A house he built across the road from his own, in 1948, is where I spent the first six years of my life]. His grandson, renowned artist David Malcolm, told me that the ‘Floyd’s’ building was built in 1930 as a cannery, which employed young women. He even related that my grandmother, Nettie Pate Brown once worked there before she married my grandfather. After the cannery shut down, it was a Venetian blind shop and later, a grocery store.

The association with Floyd’s came in 1952 when J. W. Floyd moved his popular short-order business from the Five-Story Building (Garbutt-Donovan) to this location, which was closer to the new homes and subdivisions being built on the west side of Fitzgerald.

Later owners were Wade and Myrtice Malcolm and their daughter and son-in-law, Barbara and Varnell Hendley. Walter Owens and C. L. Martin also operated a barber shop in the connected space next door to the restaurant.

Hamburgers topped with grilled onions, a concoction known as Mama’s Stew, and barbecue smoked in the pit out back were required eating by generations of families in Fitzgerald. The barbecued goat was a particular favorite.

Pam Hunter, daughter of Barbara and Varnell Hendley, kindly shared the recipe for Mama’s Stew. [Mama was Pam’s grandmother, Myrtice Malcolm]. She writes: I think great recipes are made to pass down to future generations and share with friends! You will need 2 lbs. Ground pork*, 4 lbs. Ground beef and one diced onion. Brown this up in a large pot and drain off the grease. Cover all this with water and add salt and pepper to taste. Next dice 6 large baking potatoes and add to the mixture. Make sure water still covers all. Cook until potatoes are tender. Now add 2 cans of cream corn, one can of LeSueur English peas(drain), 3 cups of Heinz ketchup, and 3/4 cup Heinz 57 sauce. Do not substitute . It will not taste the same! Go easy when adding salt as the ketchup and 57 are both salty, but those taters need some salt when cooking! I hope your families enjoy this as much as mine does! Don’t forget the crackers and salad! This makes a lot, but you can freeze it and it is still good!

*Ground pork and sausage are not the same thing, if you’re wondering. You can find ground pork in most groceries and specialty meat markets.

An iconic hamburger sign was located on the side of the building and was synonymous with Floyd’s.

This gentleman [known on the island as The Original Crabman] was getting his crab trap ready when I was walking out to the end of the pier to photograph the progress on the Golden Ray cleanup effort. As is typical, he was using a chicken neck and fish head as bait. After dropping his trap in the water off the pier for just a few minutes, he brought it back up with several crabs.

A sign identifies this amazing survivor as the Lee Pope Hotel, though it was actually housing for Pearson Farms’ seasonal peach workers.

All the structures of the Lee Pope Fruit Farm should be included in the National Register of Historic Places as an important example of a 20th century Georgia peach farm. 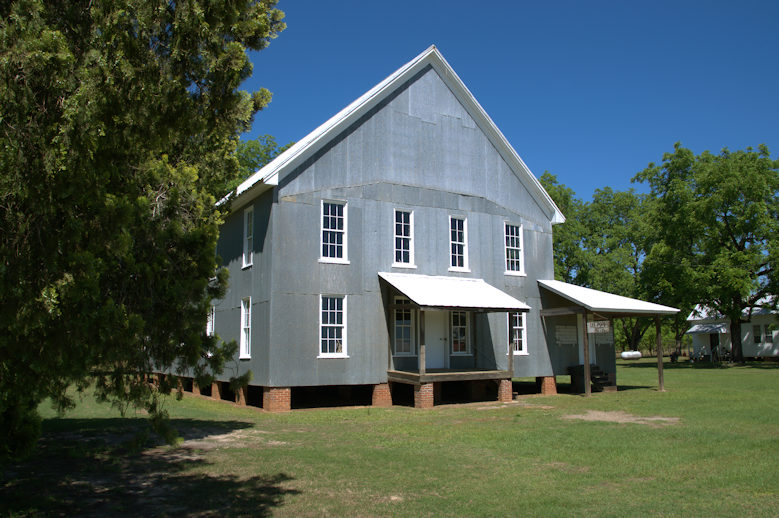 Just around the bend from Suwannee Lake stands this simple house, typical of the utilitarian homesteads of the Okefenokee. It’s likely one of the very last standing. Restored older examples can be found at Okefenokee Swamp Park and Obediah’s Okefenok.

As a boy fascinated by occasional visits to the Okefenokee Swamp, I was in awe of the name Hamp Mizell (1884-1948). Dr. Delma Presley told stories of his legendary two-mile swamp holler in Okefinokee Album [this recording is of another famous swamp family, the Chessers].  Coincidentally, I knew his daughter Montine Mizell Mathhews, whose husband Harold worked with my father on the railroad, but did not know at the time that she was a Mizell. I regret missing the opportunity to talk about her father with her. 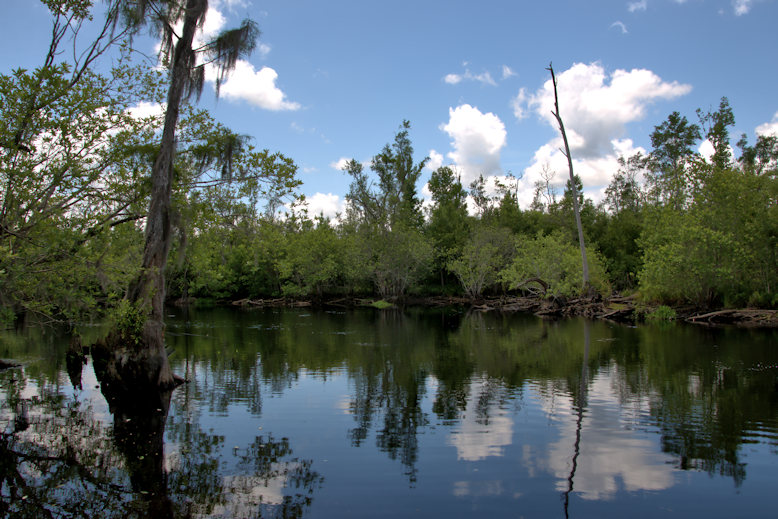 It was wonderful to visit Suwannee Lake, on the edge of the great swamp, since it has always been associated with Mr. Mizell. It’s not a big fishing hole, but nonetheless revered by fishermen in the know. Judging from satellite images, I believe it’s an oxbow of Suwannee Creek which runs from the west into the swamp. A. S. McQueen noted in his History of Okefenokee Swamp, 1932: [Mizell] is the owner of the beautiful Suwannee Lake, on the north side of the Okefenokee Swamp, one of the most famous fishing places in Georgia. A record was kept of the fish caught in this lake, and one season, 41,618 fish were caught by the hook and line method. During one day 35 fishermen caught 1,471 fish by actual count.

Chickee is the Seminole word for house, and these iconic shelters are still scattered throughout Florida. To my knowledge, this chickee in the Carter Cemetery is the only such grave shelter in Georgia.

In addition to the construction, the shells marking the graves of George Washington Carter (25 October 1862-4 July 1934) and Millie Louvine Thrift Carter (18 January 1860-30 December 1947) honor a Native American ancestry. Mr. Carter, who was born on Cow House Island, was one of the pioneer settlers of the Okefenokee Swamp. The Thrifts were also early residents of the swamp.

70,000 gallons of water issue from the underground caves at Radium Springs every minute, making it the largest springs in the state. It’s considered one of the Seven Natural Wonders of Georgia and is located just outside Albany. Over a quarter mile of the underground caves encompassing the springs were mapped by Deloach, Young, and Exley, for the National Speleological Society. Features of the caves have names like Fat Man’s Misery, Mermaid’s Tunnel, Hall of Giants, and Neptune’s Trident. Only the most experienced divers have ever seen these wonders and though rare, permits are occasionally still issued to experts wishing to explore the area. Guy Bryant has shared some nice footage on YouTube.

It was a revered ceremonial site first known as Skywater to Native Americans. After encroachment in the 1830s it came to be known as Blue Springs and was a popular swimming hole with pioneer settlers of Albany and surrounding areas. Standing near the cave entrance/springhead today, one is likely to see numerous fish schooling, including Gulf striped bass which wouldn’t be here without the cool temperature of the springs.

By the early 20th century, its prominence as a commercial recreational site was ensured and developers constructed a restaurant and guest cottages to meet the needs of day trippers who enjoyed bathing in its waters, which were a constant 68 degrees. Traces of radium were found in the water in the 1920s and the name was changed to Radium Springs to reflect this discovery. Mineral springs were all the rage in the era as they were thought to have healing powers and this only added to the popularity of the site.

The Radium Springs Casino was completed in 1927. It rose above terraced stone walls and featured a cavernous dance hall and elegant dining room.

A courtyard stands today on the site of the casino and features interpretive signs detailing the history of Radium Springs.

The stonework surrounding the springs and pool is one of the most significant remaining architectural features of the site.

These features are generally not accessible today, though, as they are beginning to crumble and in serious need of restoration.

This is one of two gazebos that were located along the beach.

The spring run which empties into the Flint River is known as Skywater Creek.

The ruins of the main gazebo are being restored.

They’re located just inside the historic gate. Both structures date to the 1920s, when the casino was constructed. At the peak of the site’s popularity, a nearby golf course was equally popular as the springs and attracted notables, including the great golfer Bobby Jones.

The entrance gate is a monumental Colonial Revival landmark.

Known today as Radium Springs Gardens, it’s operated by the City of Albany and admission is free. It’s a wonderful green space that everyone should see at least once. Though swimming or fishing is no longer allowed, it’s a wonderful place to unwind.